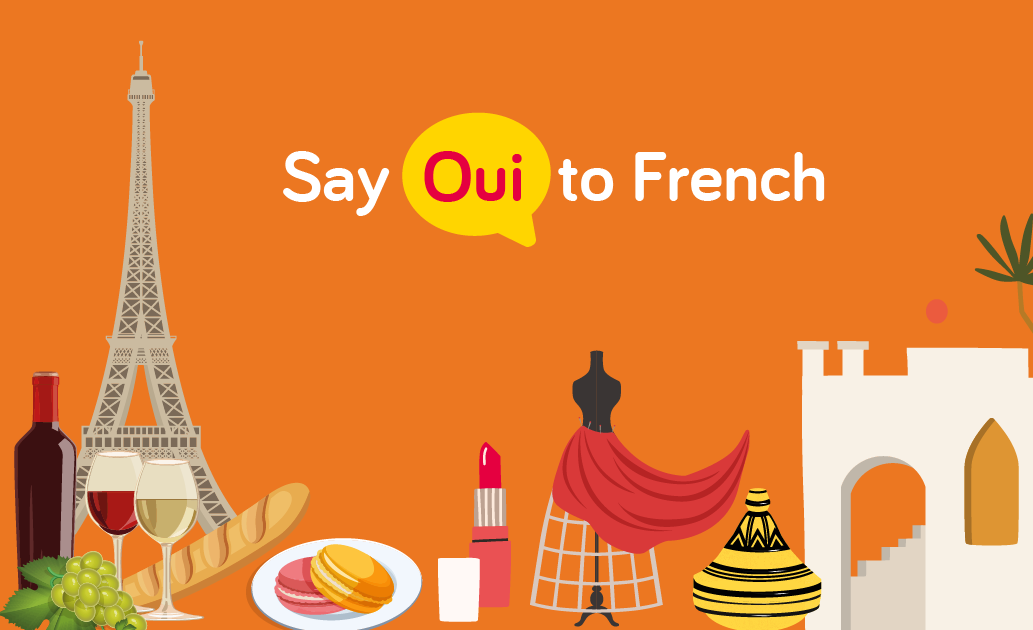 Is French the language of glamour, gourmet food or philosophy? Well it’s all those things and a lot more besides. Find out about the language and culture of France and beyond during Say ‘Yes’ to French week.

Part of the Say ‘Yes’ to Languages summer campaign, this week is perfect for anyone interested in French. You don’t even have to be a student already – newbies are more than welcome.

It’s been a busy summer at Languages Connect, we’ve already delved into Italian, Japanese, Portuguese, Russian and Spanish. You can look forward to even more action when you Say ‘Yes’ to French this week.

Say ‘Yes’ to French week is a whirlwind of activity. Tomorrow is Bastille Day, one of the most important days in the French calendar. That makes now the perfect time to polish your français.

Often noted for its beauty and poetry, French is also very useful. It’s the official language in 29 countries, second only to English. As well as that, it’s a working language in the European Union and the United Nations.

Imagine all the doors that open for you when you speak French. Brush up on your skills or start from scratch during Say ‘Yes’ to French week.

There’s no time like the present to get acquainted with French! Check out our social media channels and discover handy phrases today. You never know when these greetings might come in helpful for making new friends…

Bastille Day marks an important moment in the 1789 French Revolution, the storming of a key Parisian fortress. With parades, fireworks and pageantry, 14 July is usually a rainbow of colour in the capital.

Although things are a little more subdued this year, French people are still celebrating. Why not join in too? Get a taste for the festivities in this virtual Bastille Day celebration. Hosted by Alliance Française and the French Embassy in Ireland, you can take part in quizzes, film screenings and more throughout the day.

Worked up an appetite after all that? Then gourmands should head to our social media channels. Learn all about delicacies from hearty boeuf bourguignon and fragrant fromage to flaky croissants and delightful macarons. Then pick up the vocabulary to describe these tasty treats.

Pamper yourself this #WellnessWednesday

Beauty and wellness are synonymous with France. Not only is it a national obsession, the country has made a name for itself with some of the biggest brands in the world. Lancôme, L’Oréal and L’Occitane are just some of the major French players on the global market.

That’s why this #WellnessWednesday you should take a little time to pamper yourself. Learn all the vocabulary you need to have your very own French spa day.

As such an important and widely used language around the globe, studying French at third level gives you so many opportunities. We’re going to take a closer look at some of them this Thursday.

Louis Vuitton, Chanel, Yves Saint Laurent, Christian Dior… France is the epicentre of haute couture. If you’re interested in a career in fashion, French language skills can be key to getting ahead.

During Say ‘Yes’ to Languages, Friday means quiz day! Test your knowledge and compete for prizes in the French quiz, based on all the vocabulary you picked up during the week. Find out how to enter on our social media channels on Friday.

Saturday at the Sorbonne

The Sorbonne is a Parisian university with a history stretching back over 750 years. Explore the historic institution with Trinity French and Philosophy graduate James Shaw.

Get fascinating first-hand insights as James shares his experiences of living and working in the Sorbonne.

How can I take part in Say ‘Yes’ to French week?

Want to study French in Ireland at third level? There are so many courses around the country. From Education in Gaeilge and French in DCU to European Studies & French in Limerick College of Further Education, you’re bound to find an option to suit you. Take a look at all of them at the Languages Connect Careers Portal Language Course Finder.

With French as an elective, major or minor module, you don’t have to choose between languages and other passions. You can study French alongside music, mathematics, science, engineering and more subjects in these language options courses.

Even after you say au revoir to Say ‘Yes’ to French week, there are still plenty of ways to learn. Head to the French hub for study resources and interesting facts. You can also watch interviews with students and professionals who use the language daily on our French YouTube playlist.