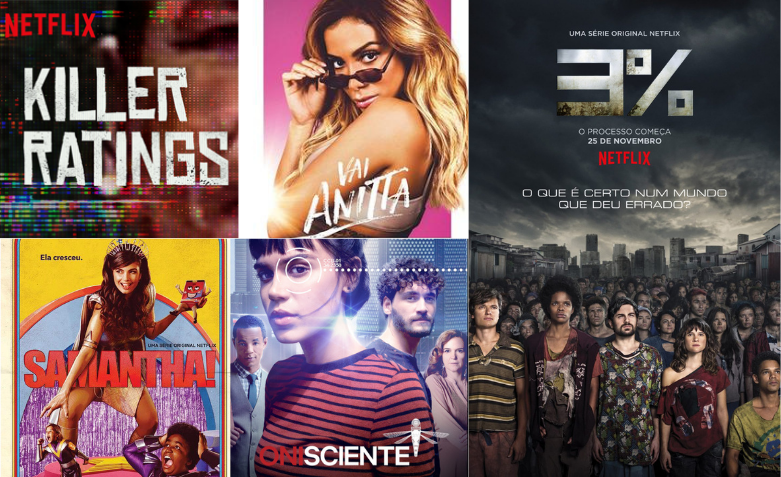 Engaging with media in your target language can vastly improve your comprehension skills. If you have ever had a conversation with a native speaker you will know that they speak quickly and use lots of colloquialisms unique to that language. While in school you do complete listening tests, often the recordings are simplified conversations, and the dialog is slowed down significantly. TV series present authentic speech while also giving you an insight into some aspects of the culture. This week we decided to focus on our favourite TV shows to watch in Portuguese from comedies and thrillers to documentaries!

This dystopian thriller was Netflix’s first Portuguese-language original series. In a future where the elite inhabit an island paradise far from the crowded slums, you get only one chance to join the 3% saved from squalor. The series is set in an unspecified future where 20-year-old individuals of the impoverished “Inland” have the single opportunity to complete “The Process” and advance to the affluence of the distant “Offshore” society. While most of the unsuccessful candidates are simply eliminated, some fail to survive, leading to only 3% of the candidates succeeding.

This fun Brazilian comedy follows Samantha, a child star in the ’80s, who clings to her fame with harebrained schemes to launch herself back into the limelight. This clever satire is a good opportunity to pick up Brazilian slang.

In a surreal twist, Souza was accused of masterminding the brutal crimes he reported on to boost his show’s ratings.

This engaging Netflix original docuseries goes behind the scenes with Brazilian superstar Anitta as the singer reveals how she’s building her international career. Lots of colloquial Portuguese.

New sci-fi series by the creator of 3%. In a city where citizens are monitored 24/7, a tech trainee must outsmart her surveillance drone in order to investigate her dad’s murder.