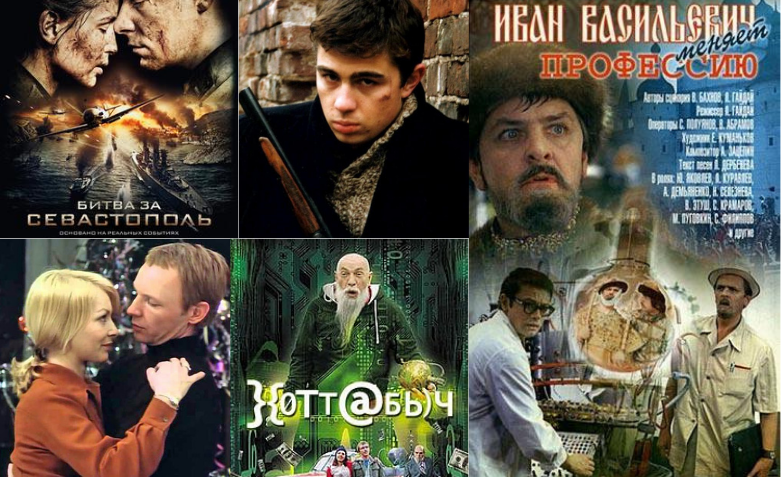 By watching movies from the country of your target language you can gain a valuable insight into the culture, the history and the colloquialisms. For Russian learners it’s extra important to watch cult classics like “The Irony of Fate” and “Brother” to get a visual representation of the mysterious “Russian soul” or russkaya dusha that you read about in most Russian literature. These movies will also give you great talking points with Russians and Russian speakers who grew up watching them and have fond memories of them. In this list we tried to combine classics with newer films to give you a nice rounded watch list!

We begin with an absolute must-watch for all Russian learners! Ivan Vasilyevich Menyaet Professiyu is a feel-good family comedy released in the Soviet Union in 1973. The film follows Shurik, an engineer who is building a time machine in his small apartment. He accidentally sends the superintendent of his apartment block (Ivan Vasilyevich Bunsha) and a burglar (Georgiy Miloslavsky) back to the time of Ivan the Terrible. Ivan the Terrible ends up in the Soviet Union in the 70s and Ivan the superintendent gets stuck in 1580! This movie is full of cultural and historical references and is available to watch in full on YouTube like most films made during the Soviet Union.

This historical drama follows the story of the world’s deadliest ever female sniper Lyudmila Pavlichenko. She killed 309 nazis and travelled to America to tour the country in an effort to convince them to join the war effort in 1942. During her tour there she also became great friends with the First Lady at the time Eleanor Roosevelt and they remained friends even after the war had ended.

This 2006 flick gives off “Eurotrip” vibes and it’s amazing. A young Russian hacker infiltrates a government server. While the government search for him he receives a package with a dirty teapot inside, after cleaning the teapot out comes Khottabych! Khottabych is a very rude genie who likes the odd beer and making billboard advertisements come to life! The hacker and his genie set off on a wacky adventure together while trying to escape the government and the evil forces chasing Khottabych.

This is probably the first movie a Russian person will tell you to watch if you’re learning Russian. It’s a classic that shows a dramatised version of what life was like in the 90s in Russia after the fall of the Soviet Union. The story follows a young man who falls into the life of a bandit. Bandits controlled a lot of what went on in Russia during the 90s and businesses often had to pay bandits for protection. This movie also has a great soundtrack for anyone interested in alt rock!

5. The Irony of Fate

We end this list with the perfect Christmas movie! “The Irony of Fate” is a funny romantic comedy that shows how uniform everything was under communism. The story follows Zhenya, a recently engaged man who is celebrating his engagement when his friends get him drunk. He boards a plane, thinking he is on his way back to Moscow and upon arrival he gets in a taxi and gives his address. Sure enough he arrives at an address with a building that is identical to his own and an apartment that is also identical, so much so that his key fits! The apartment actually belongs to a woman named Nadya and Zhenya soon discovers he flew to St. Petersburg not Moscow. A heartwarming love story that will get you in the holiday spirit.