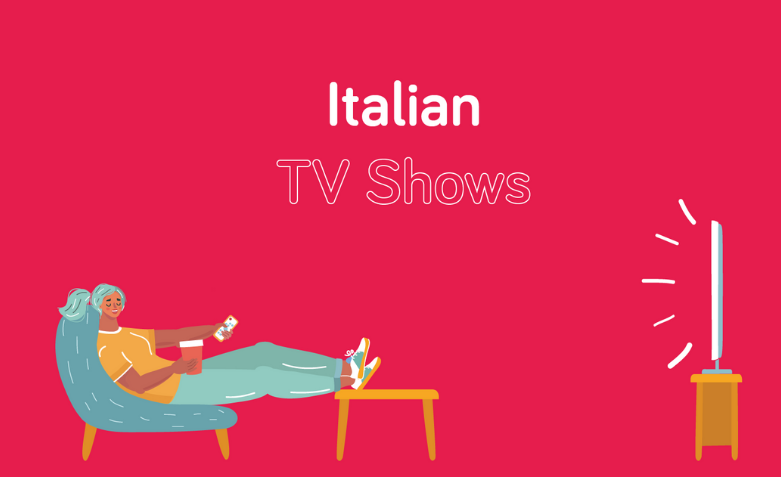 When learning a language, the most important thing is to engage with it regularly. You might not find any native Italian speakers in your home, but you will most likely find Netflix or Amazon Prime. Watching TV in your target language is the perfect way to regularly encounter native speech. In 2021 binge-watching is the new studying and whether you’re a true crime buff or a sitcom fan we have something in this list for you!

First on the list we have historical drama “Made in Italy”. Set in Milan in the 1970s, this drama follows the lives of interns, journalists, designers, and models during a period when Italy’s fashion industry was becoming world famous. Perfect viewing for any fashion history enthusiasts who don’t mind a bit of fiction thrown in with the truth to add to the drama! The characters pull you in with their stories and you will find yourself rooting for their success. The show is available for viewing on Amazon Prime.

Sabrina fans look no further than historical fantasy “Luna Nera”. You will be transported to 17th century Italy where young midwife Ade discovers witches in her family. To complicate matters, the father of her loved one becomes involved in the witch hunt, accusing her and her grandmother of witchcraft, a crime which is answered by being burned at the stake! A great watch for anyone who likes a bit of darkness. You’ll find this series on Netflix.

True crimes buffs need to check out Suburra: Blood on Rome. This criminal drama series is based on real events of the Mafia Capitale investigation, which exposed a series of corrupt relationships between the Vatican, politicians and the criminal underworld in Rome. This was the first Italian language TV series to appear on Netflix. The first season is a prequel, exploring the lives and power struggles of those involved before the events came to light. The following seasons delve into the event itself.

A bit like Italy’s answer to “Modern Family,” “Come Fai Sbagli” (“How to Do Wrong”) follows two families as they cope with modern life. The series is a perfect mixture of humor and drama, and it sums up what it’s like to raise children in today’s day and age, both the positive and negative sides of it.

If you’re a fan of lighthearted sitcoms, then this show is definitely a good pick for you. It’s also a great way to see Italian spoken from many demographics: from the parents, the children and even the moody teenagers who, of course, want to distance themselves from their parents as much as possible. It’s available for viewing on YouTube.

This series is based on the well-loved novel by Elena Ferrante and it follows the story of two young girls growing up in post-war Italy and the complications they face as their lives become intertwined between the Camorra (a mafia-style organisation in Naples) and communist ideals. The friendship between Elena and Lila is complicated but very realistic and you will see it blossom over 60 years. A really heartwarming watch that’s available on YouTube.