Spooky Traditions From Around the World 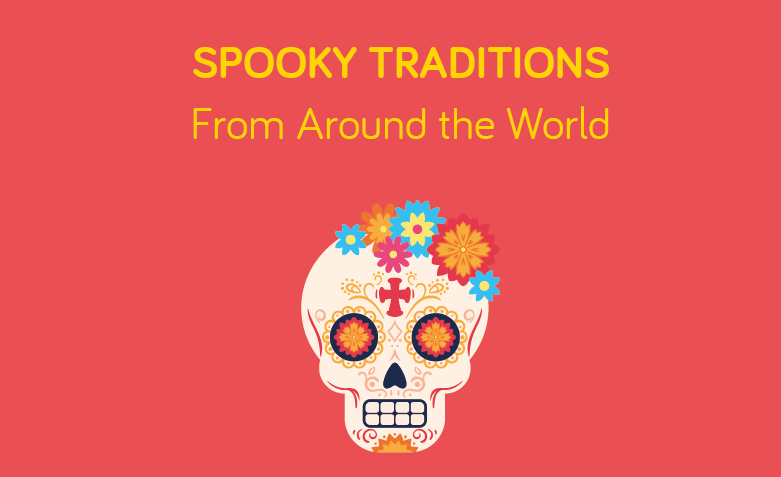 Celebrated on November 1st, this special celebration is famous for locals dressing up as their deceased ancestors in eclectic costumes. Elaborate face paint plays a prominent role as those made-up as skeletons build private altars, ofrendas, which they use to present gifts — from tequila to sugar skulls — to the dead.

The night before St. Andrew’s Day (November 29-30) is marked by several customs, traditions, and superstitions of pre-Christian origin, aimed at protecting both people and their homes and animals. Many consider this night to be the Romanians’ equivalent of Halloween, as this is when spirits go out into the world.

However, according to local superstitions, people can keep the evil spirits and ghosts away with the help of garlic. Thus, they put garlic on the windows or doors, or even inside the animal stables.

Meanwhile, girls who want to know who they will marry place basil under their pillows on the night of November 29 to November 30. Basil is also said to keep the evil spirits away, so people use it when they cook their meals. Basil is also used by priests of the Orthodox Church for various holidays or moments of mass.

The Ghost Festival is held during the seventh month of the Chinese calendar. It also falls at the same time as a full moon, the new season, the fall harvest, the peak of Buddhist monastic asceticism, the rebirth of ancestors and the assembly of the local community. During this month, the gates of hell are opened up and ghosts are free to roam the earth where they seek food and entertainment. These ghosts are believed to be ancestors of those who forgot to pay tribute to them after they died, or those who were never given a proper ritual send-off. They have long needle-thin necks because they have not been fed by their family, or as a punishment so that they are unable to swallow.

Celebrated on 2 November, a day after All Saint’s Day. The word Zaduszki originating from Dzień Zaduszny, can be roughly translated into English as “the day of prayers for the souls”. On this day people visit cemeteries to light candles and pray for the souls of the dead, especially those believed to be in purgatory.

Obon (お盆) is a Japanese Buddhist custom to honour the spirits of one’s ancestors. This Buddhist–Confucian custom has evolved into a family reunion holiday during which people return to ancestral family places and visit and clean their ancestors’ graves when the spirits of ancestors are supposed to revisit the household altars. It has been celebrated in Japan for more than 500 years and traditionally includes a dance, known as Bon Odori.