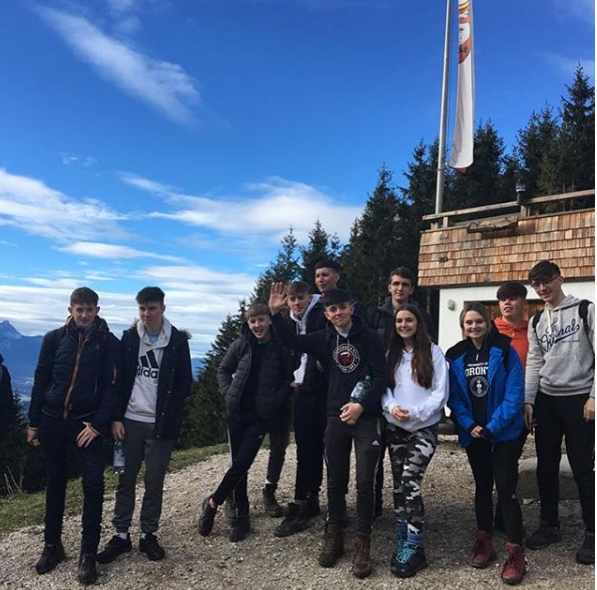 Here is an excerpt from St Colman’s Community College, Co, Cork newsletter reporting to members of the school community about their reflections of the exchange:

The St. Colman’s German Exchange with the Oskar Von Miller Gymnasium in Munich is now in its fourth year. Our group of 15 St. Colman’s students headed off to Munich from 2nd- 9th December. They spent a week living like real Münchner – going to school, hiking in the Alps, eating their way from Christmas Market to Christmas Market and in general, just soaking up the Exchange experience.

Getting around Munich Cycling is very popular in Germany, well in Munich anyway from what we’ve seen. Everyone uses bikes to get around because it’s often faster than using public transport or travelling by car. There are cycle lanes built as part of most footpaths, and you could easily get hit by a bike if you’re not careful enough to stay off the bike paths while walking around! German drivers are much more aware of cyclists though, so cycling around a big city like Munich is actually very safe. Other than car and bike, people use the bus and U-Bahn and Straßenbahn(tram) to get around. From our experience, bike is the fastest way to get around, but maybe not the best in winter, but that doesn’t seem to put the Germans off. Alison, Katie and Chris

Day Trippin’ – Up the Alps! On the Friday of our student exchange in Munich, we went hiking in the Alps which overlooked the Schloss Neuschwanstein. This is the castle on front of Viel Spaß 1 and it is also the inspiration for the Disney logo, since it is the quintessential fairy tale castle. We got a bus to Schwangau, to the base of the hike to the Rohrkopfhütte, a cabin located 1,320 metres above sea level. We drove through traditional Bavarian villages, and passed loads of ski- lifts and guest houses, all empty, all waiting for the ski season to finally get underway, as lack of snow this winter has held up the start of the season. The hike to the cabin took us around 1.5 hours. Once at the top, we had a chance to eat our lunch, rest (well needed!) and drink hot chocolate from the café in the cabin.  We took pictures overlooking the Alps and the flat plains of Bayern beneath us. We hiked back down (our legs were merely stubs upon the hikes conclusion!) and we headed back to Munich. Daniel and Donnacha 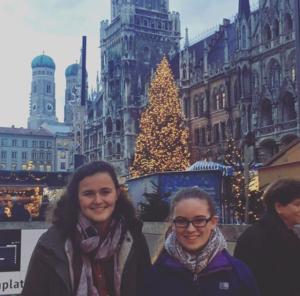 Nikolaustag and the Advent Wreath There are loads of German traditions that take place over the Christmas period.  Nikolaustag, 6th December, is a major one that we got to experience while in Munich. It is a tradition to put your shoes outside your bedroom door on the night of the 5th December, and when you wake up on Nikolaustag, chocolate and fruit can be found in your shoes! Sometimes you receive a stocking full of treats instead. Nikolaustag presents can be exchanged between everyone; friends, family and classmates.   Another tradition that is popular in Germany around this time, is the tradition of der Adventskranz (wreath). Most families have an advent wreath in their home and every Sunday they light a new candle, as it gets closer to Christmas.  The wreaths can be made from many types of plants and fruit, so they are all different. It’s something we rarely see at home like this in Ireland with proper candles, and so it was really cool to see it in our German homes. Aaron and Colom