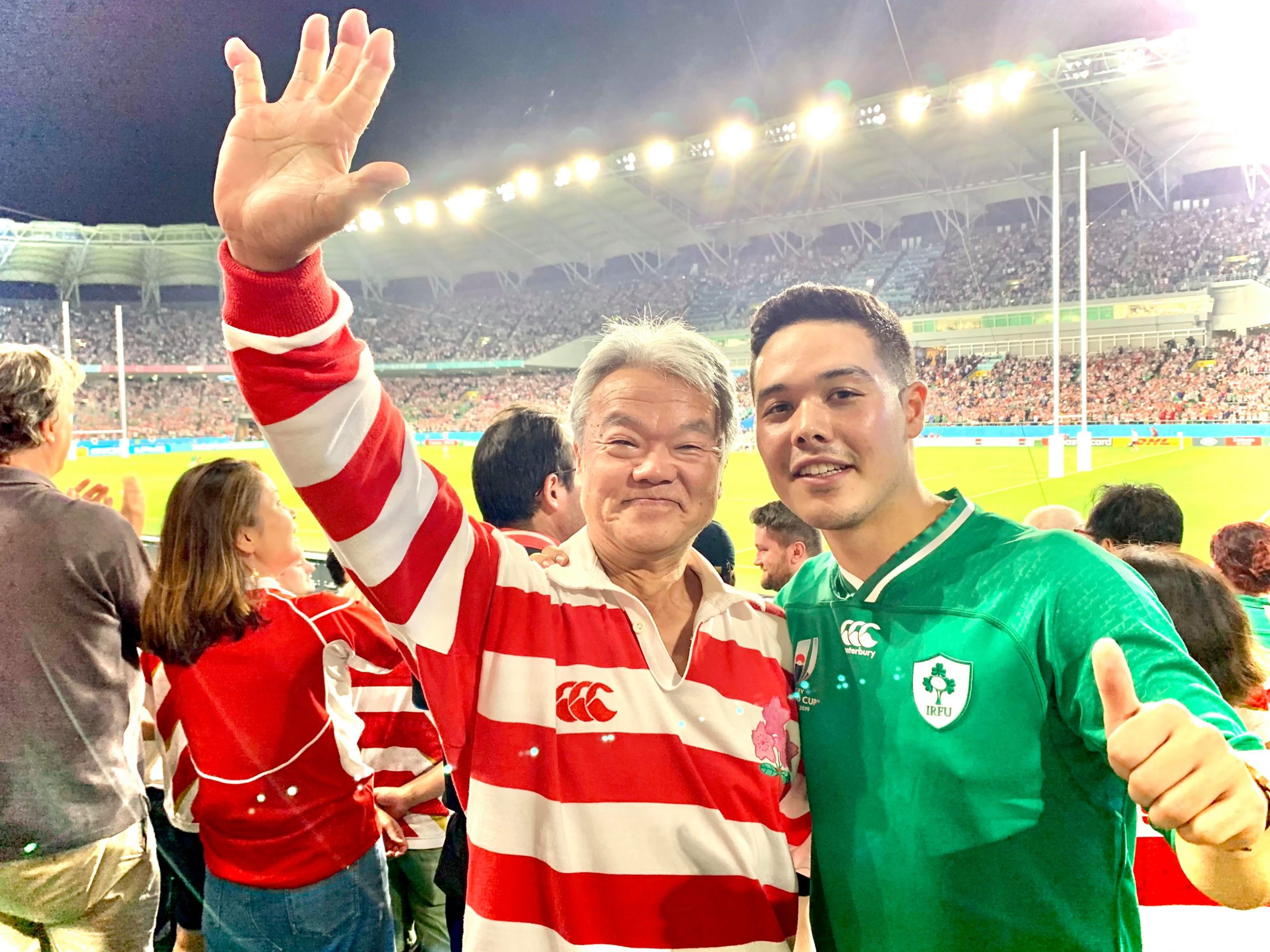 This article was originally published on The Embassy of Japan in Ireland’s website. Written by Ronan Miyachi in 2019.

Since having moved to Japan, friends and family back at home have continuously asked me the deceptively simple yet Irish question: “How’s it going over there… any craic?” As an exchange student here, I have so far experienced and learnt so many things. So much has happened in the past three months that initially, I found it hard to express it in words and therefore found it challenging to write this piece. However, I can gladly say that so far so good, I am loving life here in Japan. I am privileged to live within this unique culture, stay at a pleasant university dorm and meet so many new people. It has truly been unforgettable.

My time here in Japan has also seen many coincidental happenings. In October I was fortunate enough to experience the Rugby World Cup, whilst simultaneously exploring the cities of Tokyo, Kyoto, Shizuoka and Hiroshima. Through my attendance at Kobe University, it has been truly refreshing to meet so many people from different countries and varied backgrounds. It has honestly been an eye-opening experience to learn about so many different cultures, and hear so many interesting stories which I know I would never have the chance to at home in Ireland. However, so far, the standouts have been the deep sense of gratification I felt when I was able to attend three out of the four Irish World Cup group matches with my Osakan born, Dublin resident Japanese father, as well as some of my friends from Dublin. This includes the historical Japan vs Ireland match where the Japanese beat Ireland 19-12 in Shizuoka. Personally, I will never forget the firework display, nor the many Japanese supporters who shook my hand whilst bowing deeply saying “Arigato” to me post-match just because I was wearing an Irish jersey.

As a MEXT scholar, I feel blessed to be studying at Kobe University. I am only three months into my year-long scholarship as a MEXT Japanese Studies Student. There are a total of six of us MEXT Japanese Studies students or “Nikkensei” as we are known by the university faculty here. We are all from various countries, Vietnam, China, Bulgaria, The Czech Republic and Austria. We all have a similar level in Japanese and I believe that as a group our fluency is improving greatly due to the great Japanese language programme here at Kobe University.

Kobe University is a very prestigious university, the university consistently ranks within the top Japanese universities and is highly regarded in Japan and indeed amongst the Japanese people. As a student here, I am studying all aspects of Japanese language and culture in Kobe University’s Centre of International Education under the guidance of Professor Richard Harrison; an excellent supervisor who has been amazing in making sure that I have settled in well to the rigorous schedule. In addition to this, the administration staff have been unbelievably understanding and helpful in making sure that I have everything such as a bank account, insurance and very suitable accommodation.

The workload within the university is very intense and demanding, requiring a high level of Japanese. However, I am enjoying this challenge immensely and I am finding studying here very self- empowering. I mostly attend classes that require intermediate to advanced Japanese level. I participate in 10 classes a week, they vary from kanji, grammar and vocabulary to culture, essay writing, and analysing Japanese business and so on. Each class is an hour and a half in duration and requires a high level of concentration and participation. In addition to this, teachers assign a minimum of 2 hours of homework per class each week which results in a lot of hours studying in the college library and at home.

The city of Kobe itself is based in the Kansai region of Japan and has a population of roughly 1.5 million people. I find Kobe to be a very relaxed city where people are extremely friendly and welcoming, it is also very easy to access both the city and nature like Dublin. I am only a fifteen-minute cycle away from Sannomiya which is the city centre, and I am roughly ten-minute walk from the closest train station which brings me to both Osaka, the biggest city in the Kansai region and also the countryside or alternatively the seafront area of Kobe city. The dormitory in which I live in is very compact, yet comfortable and only a ten-minute cycle away from the university. In my room, I have a small kitchen with a hob and refrigerator, a desk and a full bathroom which is all I need to live on a day to day basis.

Similar to the millions of Irish abroad, since coming to Japan,  I have realized and found a sense of Irish-ness in myself and am constantly reminded of my changed accent or the odd lingo I use which is not understood by any other English speakers except Scottish. I constantly catch myself using words or phrases that people laugh at or do not understand such as “Howya” or “What’s the craic?” Now and again, I find myself needing to talk with my friends and family to reassure myself that I am not the only individual in the world that uses such colloquialisms. In addition to this, since living in Japan I have also realized how much of a global impact our little country of four million has had on the whole world. I have had numerous conversations with Japanese people who are fascinated by Irish cuisine, music and sport. There was one conversation in particular with a Japanese man that left me intrigued about the history of hurling and tale of Cu Chulainn in an Irish bar in Sannomiya. It seems that I am constantly faced by an interesting overlap of both cultures; an overlap which is slowly fusing to create my own identity, proud of both my Irish and Japanese heritage.

As an Irish student here in Japan it is a real privilege to be representing Ireland and I am more than grateful to MEXT for giving me this chance to study in Japan for this academic year. As a student studying Japanese, I would highly recommend this opportunity to any Irish student who is considering applying for the 2020 MEXT Japanese Studies Student scholarship. Since landing here in September, I have come to realize that it is necessary to immerse oneself in Japanese culture and society to improve Japanese fluency and proficiency and this scholarship offered by MEXT can so do so. Although I do miss home and a creamy pint of Guinness from time to time with the lads, I am glad to be living in Japan until August 2020 soaking up as much Japanese language and culture as possible and am looking forward to experiencing all that Japan has to offer.