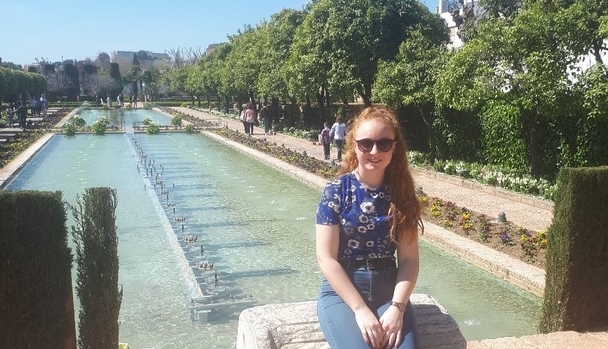 From studying languages at University of Limerick, going on Erasmus near Barcelona, to working in Madrid, Gráinne Gill tells us all about her Spanish language learning experience.

I moved to Madrid after graduating from University of Limerick in 2017. Initially I was just going for one year but after 6 weeks I decided that I wanted to stay for longer. This wasn’t my first time living in Spain – I did my Erasmus in Vitoria-Gasteiz, País Vasco as well as a few months of work experience outside Barcelona, so I definitely had a taste of the Spanish lifestyle.
For my Erasmus, I studied at Universidad del País Vasco (Arabako Campusa) for 4 months. I began studying Spanish in college as part of my degree. I studied Arts so I had to choose from a number of subjects in first year then continue with two of these from second year on. I had taken a liking to Spanish during that first year, the lecturers were great, and I found it really enjoyable so I chose to major in Spanish and Irish for the remainder of my degree. In secondary school I studied Irish which I love, and German, which was more of a challenge for me. In college I found Spanish quite easy to grasp and understand as everything was broken down and taught very well.

At the beginning of my Erasmus, it was a bit of a challenge.  I was the only one from my university in the city but that pushed me to make friends and not rely on English speakers to have a good time and learn the language. It was tough at first but the social and learning aspect of Erasmus was great. I saw that my Spanish improved a lot over the few months that I was there. By the end I was able to go to the shop and order what I wanted without any difficulty and easily have a chat with the staff working there. Small things like ordering food in a restaurant became less daunting as my confidence and language skills improved.
As a result of going on Erasmus my confidence in speaking the language increased immensely. I do think that living in a country and being immersed in the language is the way to go and hugely beneficial as you experience the language everywhere – on the metro, in the shops, on signage etc.

I love travelling in Spain, there are so many places to visit and the people are very helpful. At the beginning, I often had to ask them to slow down – ‘’puedes repitirlo más lento, por favor”(a phrase that is particularly useful in Andalucia!). By conversing with locals and asking for help, it was easier for me to get around and learn more local phrases. As part of our Erasmus there were trips organised for exploring the region including visiting local vineyards and distilleries. Spain is a great place to go solo travelling also as everything is well connected by train or bus. I took advantage of that most weekends by going to Santander, Bilbao, San Sebastian, we even went on a trip up the Cuenca mountains.

When I moved to Madrid I started working as a language assistant in a school. Since my Spanish was greatly improved from my Erasmus experience, I found it much easier to move to Madrid, particularly when looking for an apartment, opening bank accounts, getting a Spanish sim card etc. I use my Spanish on a daily basis when chatting to other teachers in the staff room or canteen and it has really helped with improving my level of spoken Spanish as well as making friends in the school.
Intercambios (exchanges) are a great way to expand your social circle and practice your language skills. Lots of intercambios take place regualarly in cafés, bars or through social media. I jumped at the opportunity to partake in these. It can be a bit daunting at first, but it’s brilliant for meeting people and making friends through Spanish. It’s also a great way to explore a new city as well as learning new local words and expressions.
Over the last few years of studying Spanish in college and during my Erasmus experience, I have watched and read a lot of Spanish movies and books. This is a great way to learn more of the language. There is so much out there to enjoy on Netflix and Spotify. Listening to Spanish music is a really fun way to learn the language. One of my favourite Spanish movies is ‘Ocho Apellidos Vascos’ . It showcases how the different regions are perceived and the varying accents. As with everywhere, different regions have their own accents and ways of speaking. It shows how diverse and unique the Spanish culture is and the varying traditions and mannerisms that exist.

Something that I really like about Spanish culture is that when they have a feast day or national holiday, they don’t push it to the weekend or take the Monday off, they’ll take that day (also it may only be in a certain region that they celebrate the day, not the whole of Spain). For example, May 15th is the feast day of San Isidro in Madrid, and if it falls on a Wednesday you have no school or work on that day. It gives you a nice break in the week too.
A favourite phrase of mine (and my housemates here too) in Spanish is ‘es lo que hay’ which translates to ‘It is what it is’. It’s short and sweet and is used to show that there’s no other option or something isn’t up to standard. We’d say it about after getting a slice of cake that wasn’t that nice, or if our plans had to change.

Spanish is a great language to learn and is fun to do so. However, it isn’t just about Spain. There are many other countries that speak Spanish. It’s a language that you can really travel with and opens up lots of different opportunities so I would definitely recommend learning it.