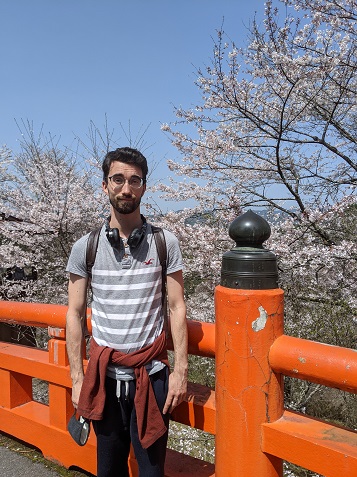 Meet Student Language Ambassador Daniel as he tells us about his Japanese language learning experience that took him from Moycullen to Kyoto. From a love of Kendo in his early teens to being accepted to the JET programme and now living and working in Japan, here Daniel shares his story…

My mother’s neighbour fed wild cats. Around lunchtime, they would emerge from the dense forest that flanks her manicured garden. Sat on the deep-set couch in her stove-warmed kitchen, you could hear them milling at the back door, purring for scraps, drawn but skittish of any unwanted approach. Nameless quasi-pets of the Galway countryside – they return to me now, almost without asking.

Over these past eleven years, I have been studying Japanese. Like something feral, it roams through spaces unexplored, sometimes coming when called for. I’ve fed it occasionally, watched it grow into something familiar, even tired, compliant to a point but always wary and inscrutable. Never domesticated. Never quite my own.

Casting my mind back, the last eleven years return to me in turn:

I am 14 – just starting kendo. My teacher gives me his wooden sword, blade chipped, handle well worn with use; shows me the basic stance, how to step, the first command – “hajime!” I fall into line, learn to count to ten.

I’m 15 and pouring over syllabary charts in my Nana’s living room, matching shape to sound in a way I’ve always found exciting – the work of ciphers, of secret notes and treasure maps.

I’m 16 now, shacked up in my uncle’s apartment for a week, rifling through a yellowed sheaf of vocabulary and handwritten flashcards, trying to shovel in everything I’d need for the upcoming JLPT N5, the lowest level of standardised proficiency test. I will fail by a handful of points.

We must be 17. Our tutor Yutaka leads us through the clothing section of a Dunnes, gently asking us to describe what we see. We get about as far as “that is a shirt – it is brown”.

I take the Leaving Cert aged 18. My Japanese Oral examiner is a diminutive woman with far more enthusiasm than anyone has led me to expect. I forget all my carefully rehearsed descriptions of Japanese crockery amid the barrage of affirmations and encouraging nods.

I am 19, 20, 21, 22. Japanese is an occasional visitor. I gloss over anime with passing recognition. My passing joke on the falling snow – jitsu wa ame desune – falls flat on a visiting sensei’s ears.

At 23, after a great deal of legwork, I am finally preparing for my move to Japan. The striking tutor at the embassy tells me kindly that my intonation could do with work.

I am 24. I commute by train in the early morning, blind to the buildings streaming by as I burn through kanji reviews at an alarming rate. Road signs are beginning to make sense. I find I can parse emails, the morning announcements, even if their full meaning is occluded by speed and complex grammars.

I am 25 years old. Corona is still newfangled, and here in Japan it will never be taken as seriously as it is at home. Escaping to a language exchange in Osaka, without realizing it, I find myself in perfect conversational flow with a lovely young man. The experience lasts about five minutes before we go our separate ways, but it leaves me wondering.

Not having the words to speak forces me to listen, and listening is its own kind of language. I listen as I pass beneath the blooming cherry blossom on Keage Slope in April. I listen as I brush my hand to the nose of a curious deer on Miyajima. Sitting in the lakeside waters of Biwako, as the evening comes on and bronzes the sky and people light fireworks in the darkness of the shore, I listen – almost understanding. Kyoto, still bustling, is muffled to my ears. The city without tourists, without the pulse of English everywhere, is comforting and discomfitting all at once – a blank space to be explored.

22 months have gone by since I arrived in Japan. I took the JLPT N4 in December, this time passing. I receive rapid-fire feedback from sensei at the local dojo and almost get it. I crack jokes with my students in Japanese; I suspect it’s less wit and more garbled pronunciation, but even so – the work of living pays off.

Japan, and its language, has come to feel more like home, always inscrutable but more and more familiar. In the midst of a pandemic, almost without asking, I met the goofiest Californian in the hemisphere. We are happy.

I will be 26 in November. My girlfriend and I are moving in together closer to town, right beside the dojo, minutes’ walk from the glorious river wending its way through the heart of Kyoto. When covid lifts, we will go out into the streets to find our own flow.

Hajime – “begin”, used at the beginning of drills and matches