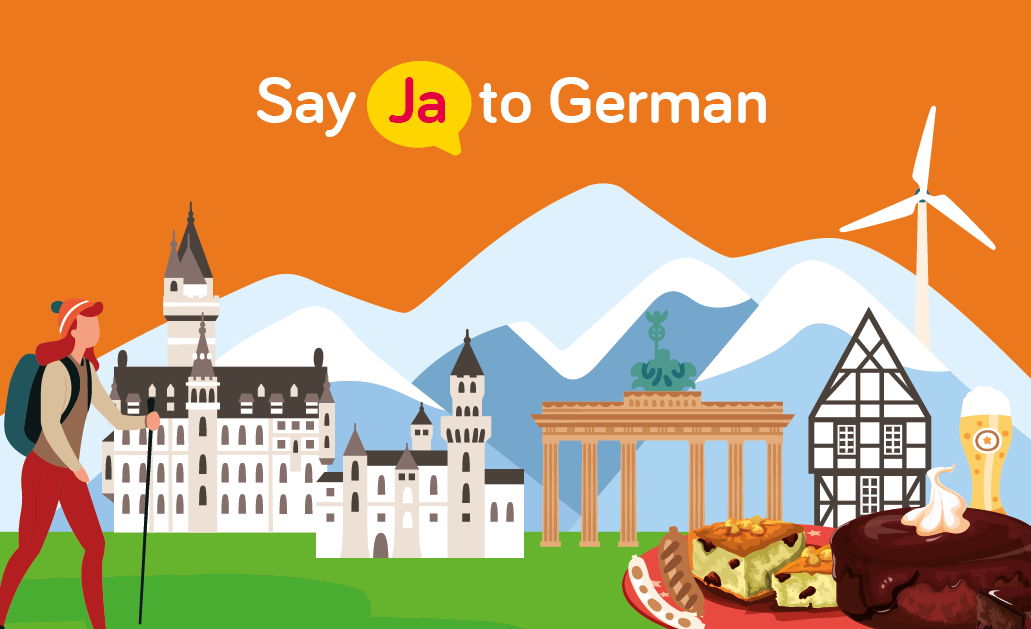 Brace yourself for a whole lot of fun during Say ‘Yes’ to German week. Starting today, we’re going to celebrate the language and cultures across the German speaking world.

This is part of our Say ‘Yes’ to Languages summer campaign. During the past few weeks, we delved into the eight different languages, including French, Arabic and Japanese. You have another fascinating week lined up thanks to Say ‘Yes’ to German week.

Deutsch is an extremely important language in the European Union. In fact, it’s the most widely spoken native language in the region. German is also the second most used scientific language.

As well as that, the German speaking world has a fascinating history, enviable countryside and some of the most exciting cities on the planet. All of this combines to make German a very handy language to learn.

During Say ‘Yes’ to German week, you can discover just some of the things that make the language and its cultures so special.

Wave hallo to German on Monday

First off this week, you can get stuck straight into vocabulary basics. Learn simple greetings in German as you start getting to grips with the language. Then why not practice your new vocab in our fun quiz?

Help yourself to an extra yummy breakfast this #TastyTuesday. One of the things that Germany is famous for is a particularly tasty breakfast spread. Meanwhile in Austria, the focus is on elegant cakes and coffee for your mid-morning break.

Take a seat at our virtual table and learn all about these morning-time treats. Plus get all the vocabulary you need to describe the dishes in German.

#WellnessWednesday in the German countryside

Need some exercise after all that indulgence on #TastyTuesday? Well on #WellnessWednesday, take a virtual hike through gorgeous German landscapes.

On your trip you can spot castles, lakes, rivers and forests. German’s spectacular countryside inspired many fairytales and it’s not hard to see why…

Learn more about the engineering industry in Germany this Thursday. From Mercedes and Audi to Bosch and Siemens, some of the world’s most renowned companies are based there.

As well as that, 1.3 million people in Germany are employed by the industry. If you’re interested in engineering, German is a very useful language to learn.

On Thursday, you can also watch a Q&A with Language Ambassador Aisling McGrane. In this session, she’s going to answer questions on her experiences studying German, Spanish and Irish at the University of Limerick. You can also hear how she got on taking classes in the University of Potsdam, Germany.

Now is the time to put all the vocabulary and facts you learned this week to the test with the big #GermanWeek quiz. Try your best and you just might win one of the great prizes up for grabs…

Open up our Spotify playlist to check out some of the coolest German language songs around. This is the perfect soundtrack to your Friday, with plenty of different artists to discover.

Pay a visit to Google on Saturday

Did you know global tech brands employ lots of people who speak multiple languages? For that reason, languages can give you a real head start if you’re interested in tech.

This Saturday, find out what it’s like working with German in Google. Spend a virtual day in the offices and see if all those famous perks live up to the hype.

How can I take part in Say ‘Yes’ to German week?

Right now, Say ‘Yes’ to German week online activities and events going live on our Facebook, Instagram and Twitter. Follow these social media channels and then you can take part in all of the action this week and beyond.

Students who choose German at third level have lots of options. Just check out the Languages Connect Careers Portal Language Course Finder to see the many courses you can choose.

Arts with German in Maynooth, German as a Modern Language in Trinity, International Commerce with German in NUI Galway… There are choices all over the country when you study German.

There are also lots of courses that offer German as a major or elective option. That means you can combine your love of mathematics, engineering or philosophy with German.

Not ready to say Auf Wiedersehen to German at the end of this week? Well then simply head to our German hub for more vocabulary, third level courses and more.

Take a look at the videos in our German YouTube playlist to hear first-hand accounts from Irish people. When you’re there, see how a real-life secondary school exchange went. You can also learn how an opera singer, human rights advocate and business owner use German in daily life.

When German week is done and dusted, there’s still plenty of Languages Connect action to look forward to. Make sure you follow us on Facebook, Instagram and Twitter to stay up-to-date this week and beyond.